How can you predict what that little baby boy that you hold in your arms for the first time will do when he grows up?  One would think a boy growing up in seemingly an average environment would turn out to be an average teenager who would grow into an average adult.

As many of us as boys, we would play different games with our siblings, which would include perhaps sword fights with an array of tree branches and sticks. In my case my sister was the one who had to endure a young 10 year old’s exuberance for experimentation with these kinds of implements.

My son, probably fortuitously when playing these kinds of games, only had brothers. He often made good sport of his younger brother as he practiced his techniques as a young lad. Of course, his younger brother, slightly smaller at the time would often fight above his weight, giving a reasonable effort in response to my eldest son’s foray with the sword which in those days was an old stick from behind the shed.

Maybe on reflection there was a clue to be had in the formation of this young man turning himself into a medieval knight.

His mother is an enthusiast of reading, and as the boy grew, was encouraged to read. He took to it like a duck to water. He first started to read some of the adventures his mother had already read, consuming compared to my level of enthusiasm for reading, outrageously thick volumes of the printed word.

His favored readings were mysterious adventures like the ‘Lord of the Rings’.

I am really not sure, along with his mother’s encouragement to read the books she had read, which in turn lead to greater exploits in to these unreal worlds based on a medieval theme, whether I may be to blame for my son turning into an armor clad knight.

When I was a lad of tender years, I was part of a small group of boys in our church group. We would go out on various outings, generally related to the bush, either camping or walking. On such outings or camps we were fortunate to have a young man of about 23 years old, who to us was old, as many older people are when your are 13 or 14 years old.

He was an unusual young man in many respects. Being religious, but with a quirky sense of fun.  His hobby was to collect railway memorabilia.

I remember him inviting us to his home in the hills east of Melbourne where in his room and around the house were countless articles from railway auctions. He also was an accomplished organist, playing large pipe organs in various town halls and churches in Melbourne.

He was an enthusiastic listener to the Goon show on ABC radio, staring Harry Secombe, Spike Milligan and Peter Sellers. I remember vividly listening to show after show on a portable radio one time on a camp with him and the gang.

This camp was the making of us all. It was through a game thought up by one of the organizers of the camp similar to capture the flag. We, the gang and our fearless leader took off to a spot about 10 kilometers from the camp. We were to travel back to the camp somehow rendezvousing with a scout who had a message. Somehow, without getting captured by a larger band of searchers patrolling the bush from base camp who were looking for us, we were to get into the camp undetected with the message from the scout.

We all had green armbands placed on our arms. This was a bit of an imposition since we had decided to become close to invisible in the bush by putting on army greens purchased from army disposal stores. This meant removing this armband without breaking it and putting it on again over our greens.

No sightings of the searcher on the first day, but early on the second day we sighted an advanced party. They may have spied out our campfire the night before. Although two of the gang had gone ahead, most of us were still all together. On the sighting of a small advanced party, we scattered and hid.

We learned later that the two that had gone ahead had been captured and that the scouts also had been captured the day before. Most of us were able to regroup and since we were still a long way from the base camp we started to make some good ground, while keeping a sharp lookout for more searchers.

We became aware that we were not going to complete the assignment of meeting the scouts, but we were resolute to get to base camp undetected and have at least one make it to the camp, uncaptured.

We wheeled around to the side of the base camp and came in from a direction not expected by the searchers. Finally, with only open ground between the camp, and ourselves we were spotted. While a couple of us climbed some trees, we were able to distract the searches allowing a couple of us to make it to the camp.

As a result of my association with this man, our fearless leader, some 15 years later I decided to name my first son after him.

His name was Lance. Not entirely sure whether this fateful decision had anything to do with my son becoming a medieval knight. But as one of the famous mythical knights of the round table of Camelot was called Lancelot, this may have some relevance to the favored activities of my son.

After coming home with stories of participating with the local chapter of a medieval guide, various articles like plates and mugs would disappear from the kitchen cupboard for the day. The common theme of all these articles was that they all looked similar to eating utensils used in the 13th and 14th centuries.

He would come home with stories of guide members having medieval feasts and make particular reference to the ancient medieval drink, mead. He would have one or other craftsman make gauntlets, shields, armor or swords for him to participate in combat sessions with the guild and other clothes like cloaks and gambisons for social events.

One day he came home with several bags of split washers. Being puzzled at the possible use 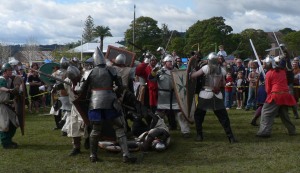 He invited me to a fair in a town out near Taree in New South Wales on one occasion. Once there I saw a large crowd of people standing around a roped off area, watching something within the roped off area.  The sound from the circle was like someone hitting several saucepans with a hammer all at once. It was two groups of armored fighters with swords, shields, spears and an array of other medieval implements of war bashing each other in a mock battle until only one side was still standing.

Lance here is standing at the ready in the red tunic, with the biggest sword I have ever seen.

As he is interested in horses, he started working with a lady, the green knight, who trains horses to do the medieval sport of jousting. Lance asked me one day to watch him do his job as a squire assisting in the joust. 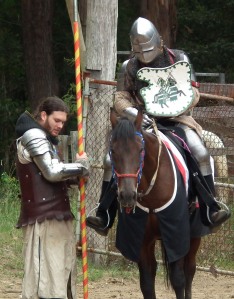 His job was to present the lance to the rider before the joust. On the day two armored knights with their armor shining gallop towards each other with balsa wood tipped lances.

Then after several passes, the green knight says, let’s practice our archery. Lance foolishly asked; what would you be using for a target? The green knight retorts back, you can be our target.

Next I see my son standing in the middle of a horse parading ground, fully clad with armor, being shot at. There were two mounted female archers firing rubber tipped arrows at him.  Unbelievable.

Next I find my son involved in an even more unbelievable activity. He had been asked to be the rider in a jousting display. But this was no

t just an ordinary jousting display. He was to ride on the back of a quad bike attempting to knock other rider off the back of the other quad bike, in front of an excited crowd of onlookers in the stadium.

Lance here is in the golden helmet completing a choreographed dismounting of the other jouster. 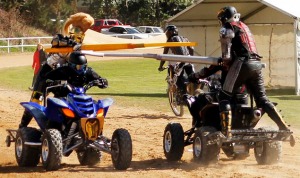 Once accomplished, Lance was to dismount and fight the other armored knight with his sword or axe, apparently to the roar of the excited crowd. (Photograph thanks to Wingus)

Now his exploits, along with his fellows, complete in battle attire, are being recognized in the local newspaper. This is a picture taken in the 6th of June local paper. Now in the foreground with a red and blue shield, Lance is recovering from a spill off the narrow bridge being defended by gallant group of knights and squires.(Photograph ref. Lakes Mail 6th June 2011)

My son the medieval knight.